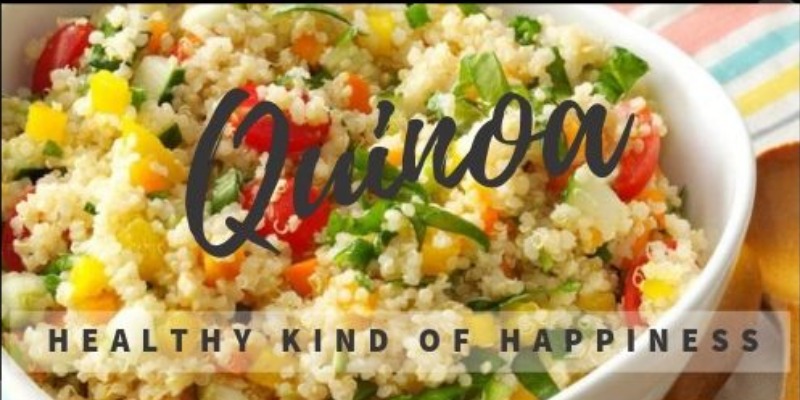 Quinoa is one of the healthiest and the most nutritious foods on the planet, that over the years has gained steady popularity and has become the most sought after edible seed. Botanically related to the spinach, the nutrient-packed Quinoa seed is an ancient grain crop loaded with health benefits. Eaten for thousands of years by the people of South America and grown on the Andes Mountains, Quinoa(pronounced as keen-wah) has come a long way from behind the shelves of health food to the main aisles of all the popular supermarkets.

Enjoying the status of being a perfect substitute to starchy pasta and rice it has recently become a trend food and has reached the superfood status. This mother of all grains Quinoa is not only Gluten Free (making it a great option for gluten intolerant, especially to the staple Indian grain like wheat ) but it is extremely high in Protein. Having a very High Fibre content Quinoa is also one of the few plant foods that contain sufficient amounts of all nine essential Amino Acids, Magnesium, B vitamins, Iron, Phosphorus, Vitamin E, and various Antioxidants and Flavonoids.

It’s sweet, nutty flavour and its delicate texture or incredibly easy cooking recipes make Quinoa one of the most perfect ingredient on the block. It can be incorporated in any form in a breakfast bowl, lunch or a dinner menu. Easily available at all supermarkets and grocery retail stores, it is a perfect health food that can be Flavourful, Healthy, Toothsome and Wholesome all at the same time.

· Quinoa has a Low Glycemic Index of around 53, meaning it won’t cause a dramatic spike in blood sugar. This makes it a healthful option for diabetics. It is also said to keep blood pressure and cholesterol in check although some more research needs to be conducted here.

· Quinoa is high in antioxidants- substances that neutralize free radicals and helps fight the ageing process and many diseases. Sprouting of the grain further increases it’s antioxidant levels.

· Quinoa is a salubrious, wholesome grain for weight watchers. It helps to both increase metabolism and reduces appetite significantly due to its high protein and fibre content. Feeling of fullness after consuming a bowl of Quinoa makes one eat fewer calories overall.

Quinoa, however, comes with an outer protective layer of bitter-tasting Saponins. (Saponin help to protect the plant from animals, insects). Luckily, it’s easy to get rid of this coating by rinsing the Quinoa several times just before cooking. Boxed quinoa is often pre-rinsed, but it is advisable to give the seeds an additional rinse at home.

Nutritionally decorated with incredible power-packed health benefits and it’s versatile nature to be incorporated in most recipes, makes Quinoa one of the most desired and easy to love ingredient of the pantry shelf. Use Quinoa as your base ingredient, and be as experimental and creative as you can to dish up some delicious, perfectly fluffy and healthful recipes. 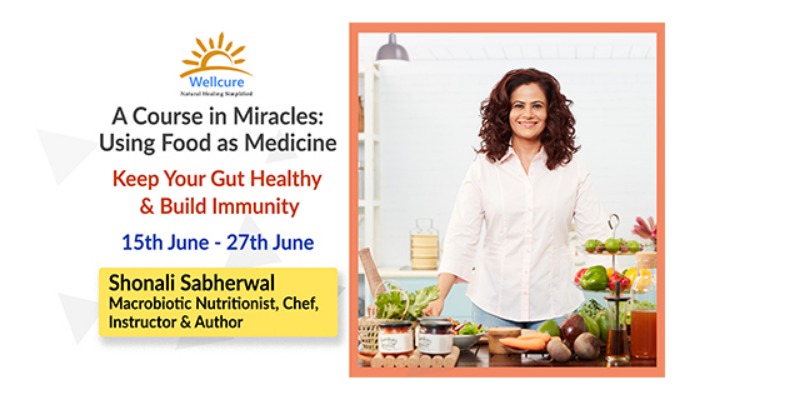 A Course In Miracles: Using Food As Medicine

Learn the Art of Healing Through Food, Power of Macrobiotics 15th - 27th June  2020 Duration: 12 Hours  Zoom Cloud Meeting  JOIN NOW with India's First Practicing Macrobiotic Nutritionist and Graduate of the Kushi Institute, USA. Food is our life energy, the cause of both our health and diseases. If we watch what we eat, we can keep diseases at bay. However, it is easier said than done. Do we all have the knowledge of what to eat and how, in order to heal our body and get away from diseases as deadly as Cancer? A Course in Miracles: Using Food as Medicine by Shonali Sabherwal, India's leading Macrobiotic Nutritionist, Chef, Instructor & Author will guide you through healing via foods.  Know before you Enroll - What is Macrobiotics? What does a Macrobiotic diet mean? How can it heal diseases? How can food heal ailments? How can food be used as medicine? About Shonali Sabherwal. What does the course comprise of? How can you ben

Holistic Nutrition is one of the healthiest things you can do for your body and the environment. Increasing popularity and acceptance shows that more and more people are turning to it. Curious about a Holistic Diet? Discover what to eat and what to avoid, how it benefits your health. Learn ways to implement it into your life for optimal health and help your clients to reach their health goals. Ideal for yoga trainers/therapists, naturopaths, doctors, nurses, gym trainers, beauticians, alternate medicine practitioners, and anyone wanting to be healthy. Know your trainer - Dr. Gauri Rokkam Well known for her applied approach of blending Western modern medical nutrition with Eastern Yogic philosophy of food & Naturopathy Ph.D. (Yoga & Life Sciences) SVYASA Yoga University, Bengaluru M.Sc. (Food & Nutrition), Bangalore University Topper Certified Nature Cure therapist International Institute of Mahayoga & Natural Hygiene, USA Certified Diabetes Educa

Sugar Out, Sweet In - Fun, Sweet & Healthy Eats For Kids

Online Group Program 1st Jun - 7th Jun 2020 BOOK NOW Toffees, chocolates, chips, cakes, breads, jams, ketchup, biscuits, packaged juices & drinks, mithai, yogurt, breakfast cereals, health drinks, the list goes on. Do you know how many spoons of sugar is your child consuming in a day? It is hidden in many forms.   What is it about sugar which makes it a culprit of health, even for a child? Not just dental decay & obesity, the harmful effects of sugar include lowered immunity, loss of vitamin & minerals, disturbed sleep, hyperactivity, allergies, chemical toxicity, and a lot more. In these times, robust immunity is a must for kids.  Our little munchkins need much healthier variants of foods. But how to identify the right sugars for kids? Who has the time to cut out all processed sugars? What are good sugars? How can we include the sweet taste in our kids' meals but exclude the harmful sugar?  If you are a parent struggling with any 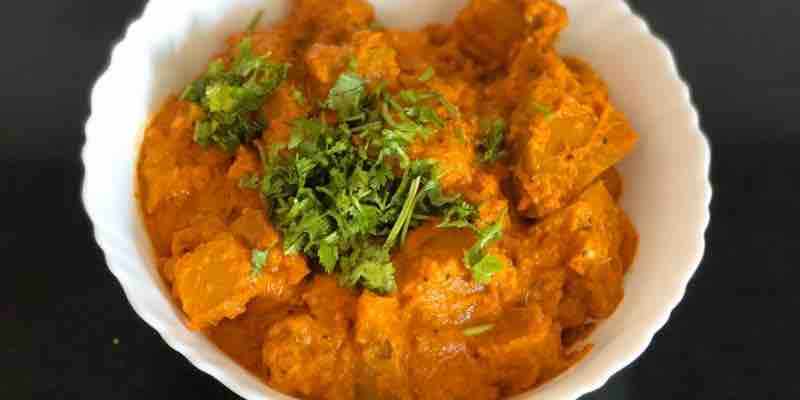 'Sasve' as known for in Karnataka, this dish is quick to make when you have pumpkin at home. The highlight of this dish is the mustard. The subtle flavour of raw mustard gives a unique taste to this tangy dish. This has fresh whole coconut that brings in healthy fats, unlike the oils. Since most of the dish is raw or steamed, it's far more healthy than a excessively cooked dish. 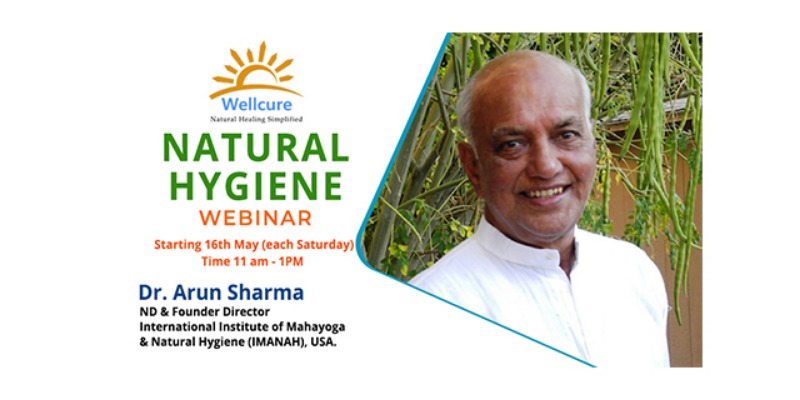 Webinar Series On Natural Healing & Hygiene With Dr. Arun Sharma (learn The Self Healing Powers Of Our Body)

We are living in a historically important time, where the norms of the world are changing, where social distancing is a rule and robust immunity the key to survival, where co-morbidities like hypertension, blood pressure, and heart problems can prove to be fatal in the face of the global pandemic.  The changing order of the world advocates a change in our lifestyle and mould our outlook towards nature. If we respect nature and comply with its laws of life, we stand a strong chance to emerge stronger than ever and survive the worldwide health crisis. The practice of Natural Hygiene is one of the ways to do it. It encourages applying the laws of nature in the restoration of good health through modifying diet and lifestyle as per nature's design for us. In light of the above, Wellcure is bringing a series of webinars to you, with Dr. Arun Sharma, the distinguished Natural Hygiene practitioner, who will share how we can equip our bodies to heal better, live better, stay he